Wiring a Ceiling Fan for Separate Control of Fan and Light

Here is a quesion from a site visitor asking how to wire a ceiling fan and light kit with separate control switches for the fan and the light.

Question:  I would like to wire two ceiling fans — the power comes into the box first — I would also like to have two separate switches for lights and fans. Any diagrams would be helpful. Thanks for your help.

Answer:  In the question above, I am assuming that this is a new installation, and as I understand the question, the power now comes in to the first ceiling box intended for mounting the ceiling fan.  In roughing in wiring for a ceiling box that has a potential to have a ceiling fan installed either now, or in the future, it prudent to wire the circuit for separate control of the fan and the light kit on individual switches.

Make sure you mount the ceiling outlet boxes firmly, and with extra support so as to handle the additional weight of the fan.  Check with your local electrical and building inspector, as well as the manufacturers recommendations.

With the power coming in to this circuit at the first ceiling fan outlet box, here is how to run the cables for this circuit.

Here is a diagram to show how this circuit will be connected.  I will show only the first ceiling fan and control.  Duplicate the spicing for the second ceiling fan / light. 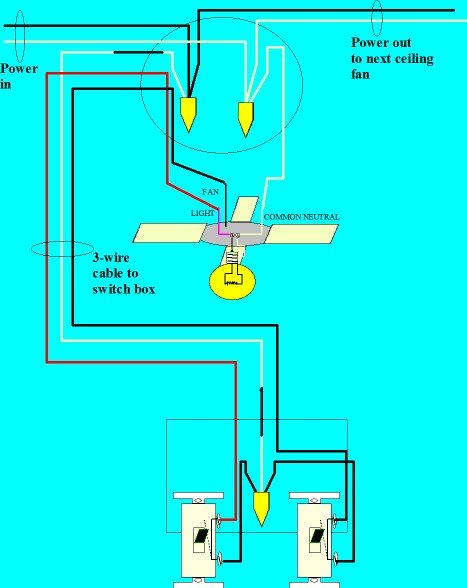 When installing a ceiling fan, if you are dealing with existing wiring, there are 3 main issues that you must check out before beginning.

If the existing wiring has only 1 switch for control, and the power comes to the switch first, then you can only control power to the ceiling fan assembly via the switch, and you have to control the fan and the light with the pull-chain switches when the wall switch is on.

If the existing wiring is such that the power comes in to the ceiling box first, and then uses as switch-leg drop arrangement, you can control (for example) the light from the wall switch, and have the fan wired directly to power so as to use the pull-chain switch to control the fan.

There are other options available as well, such as remote control devices allowing you separate control of the fan and the light kit if your wiring options are limited.