Why You Should Never Staple Cables Too Tight

There have been a few “ah ha” moments in my life, ones when it suddenly becomes glaringly obvious as to why you were taught a new lesson, or why someone instructed you on what not to do. At the time it may seem not that important, or in some cases, quite a useless waste of brain space. I’ll bet most of you can relate. Such a moment happened for me a couple of month ago involving the simple process of stapling cable.

While apprenticing, I remember being told in no uncertain terms, “Do not hammer in your cable staples too tight!” While it seemed obvious that you don’t want to smash them in hard enough to damage the cable, what harm could it do if you make it just a bit too tight?

Back in November of last year, I received a call from a casual acquaintance that I knew of through mutual friends. He and his wife had purchased a home in our area a few years ago, and were in the middle of a kitchen renovation.

The problem surfaced after he had reconnected his receptacles in the kitchen area and turned on the breaker. Later on Bob’s buddy Jim was helping him out and Jim heard a breaker kick in the main panel.  It was the breaker for the circuit Bob had just restored the power to. The circuit was one of the kitchen circuits that fed a GFCI receptacle, and then the next receptacle was fed on the load side of the first GFCI.

Bob assumed that he had connected something wrong, so he took apart the affected receptacles to double check his work. Everything looked good, and he had been careful to take notes of what wire went where when he disconnected the receptacles for the installation of the new tile back splash.

After a few attempts at resetting the breaker and then pushing the GFCI reset button, Bob saw a spark from the receptacle, the breaker tripped again, and Bob called me to see if I had any ideas.

I gave him a few suggestions to try, such as making sure when he reinstalled the receptacles that the bare ground wire wasn’t touching a terminal for the hot or neutral conductors, or checking to see that he hadn’t inadvertently got his line and load terminals mixed up on that first GFCI receptacle.

The next day he called back.  He had tried all that my suggestions to no avail, and was certain that he hooked everything up as it was previously. He was stumped and now at a standstill as he didn’t want to go any further with the project until he solved the problem.  I agreed to come over and have a look.

Most times when I’m helping someone troubleshoot an issue, one of the first questions I ask is, “What were you doing when the problem occurred”? Many times the answer comes back, “Nothing really, just drilling a hole for a new pipe”, or, “Just hanging a picture with a 4” nail”, etc.

I went over ready to troubleshoot what I believed would be a quick fix, such as finding something connected incorrectly, or a suspicious looking newly installed screw somewhere around the trouble area, but no such luck. Nothing obvious was out of order.

I disconnected the receptacles and restored power to the circuit. The breaker reset without issue.  Checking with my meter, there was 120V at the first receptacle measuring hot to neutral, and hot to ground (as it should).

Then I tested continuity on what I could only assume was the cable going to the next receptacle. I had an inconsistent reading when checking from wire to wire at each location, and when checking between the hot and neutral, and hot and ground, and in fact, neutral to ground.

The ohm reading was bouncing around, but regardless of what it was reading the reality is that it should have had no continuity at all between wires, telling me that we had a short circuit somewhere.

Bob showed me what he had done, and nothing in the renovation he was doing (new tile back splash) should have resulted in damaging the cable inside the wall. We decided to take out the section of cupboards and make some access holes to find out where the problem was. 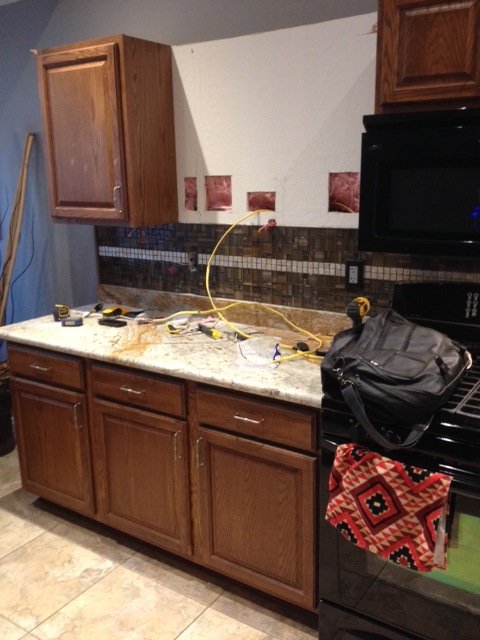 Once we had a few holes big enough for my hand to get in and feel the cable, I found an extremely tight staple fastening the cable to the stud above the second receptacle.

I had to pry the staple off, pull out the cable, and found that the cable staple had been hammered on so tight that it finally broke down the insulation and caused a short circuit. 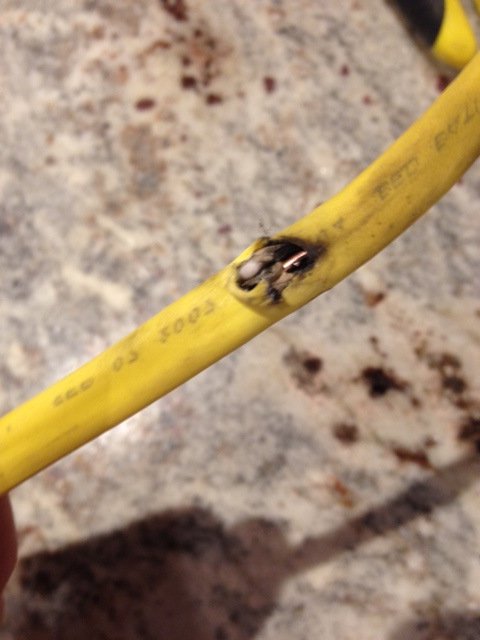 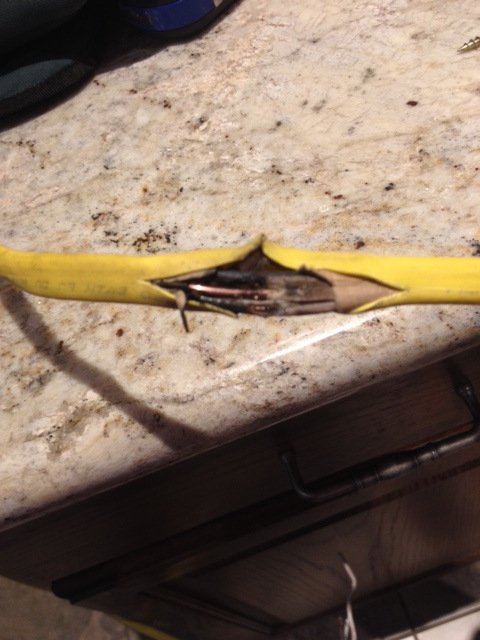 I’m not a fan of this type of cable staple as it has no ‘stoppers’ to assist in preventing this from happening Here’s a picture of the cable staple used in this home, and the staples that I prefer so you can see the difference. 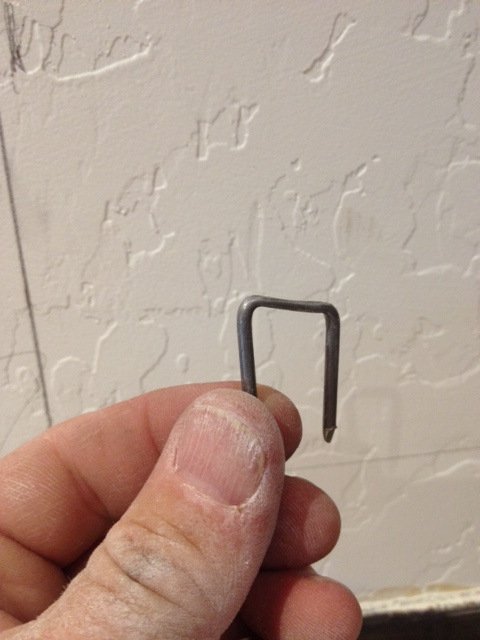 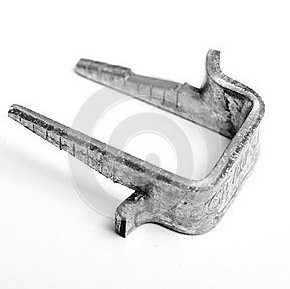 To fix this problem, I just replaced the cable between the receptacles (easy to do with the access holes), and connected and installed the receptacles. We put the cupboards back in place, and Bob could carry on with his project.

It turned out that removing the cupboards also revealed another potential problem.   We discovered that the cables installed by the original contractor for the purpose of pre-wiring future under cabinet lighting had been inadvertently stuffed back inside the wall and hidden by the cabinets.  Bob’s plans included under cabinet lighting as part of this renovation.  I likely would have received another call a few days later because one critical splice/junction of the cables would have been missing! 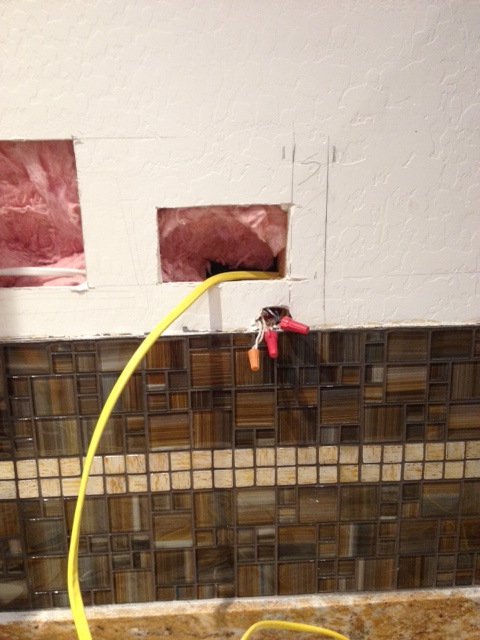 The hidden under cabinet wires 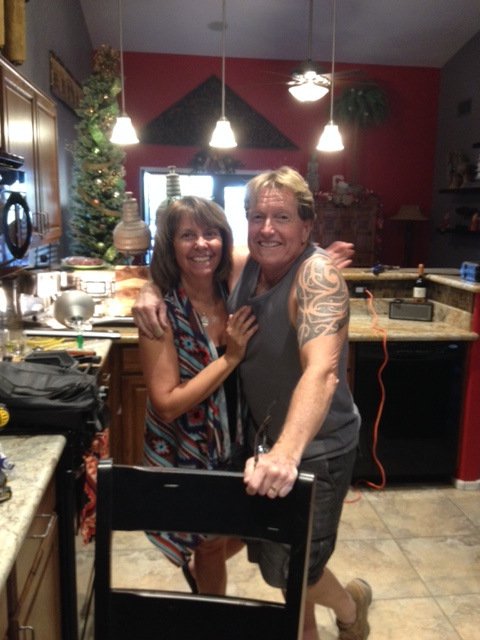 Bob and Karen still smiling through the renovation!

So what is the lesson here? Do not hammer in those cable staples too tight. They should be just enough to hold the cable in place, but not so tight as to pinch the cable. It may not look like the staple is damaging the conductors, and the problem may not present itself for a few years after installation, as was the case here. This home is probably close to 10 years old!

How about you?  Have you experienced a similar situation?  Feel free to share your experience on my Facebook page.