Understanding an Open or Loaded Neutral

What is a loaded neutral, and why did I get a shock from it? Is it just one of those electrical mysteries, or is there a simple explanation for this situation?

What is a loaded neutral, and why did I get a shock from it?   Is it just one of those electrical mysteries, or is there a simple explanation for this situation?  Read on to hear about a situation that I experienced recently in which a friend encountered an open or loaded neutral while doing some DIY wiring and needed some help understanding what caused the situation.

Every once in a while, situations arise that don’t follow the normal set of rules when working with electricity. In my experience over the last 35 years, there is only one mystery that to my knowledge has never been solved. When working in the oil industry back in Alberta Canada, we had a situation where a high voltage breaker feeding a large electric motor would randomly trip. Literally thousands of dollars were spent by Shell Canada to try and solve this mystery.  We swapped the motors, swapped the breakers with the redundant back-up motor, and finally pulled in new conductors through thousands of feet of conduit, all to no avail.  That particular breaker continued this mysterious behavior and they finally just accepted it, and dealt with these random disruptions. Was (is?) it a ghost ……..?

Aside from this little mystery, most electrical anomalies have an explanation. One day I received a call from a friend who was puzzled as to why his light fixture wasn’t working despite the fact that he had 120 volts showing on his meter when he took a reading from the hot wire to ground. Although not an electrician himself, he is a “jack of all trades”, and makes his living as a handyman. He is no stranger to renovations, and when he works on his own home, he does his own wiring under a home owner’s permit. Such was the case here.

With my telephone assistance I had him do a few troubleshooting tests with his meter. The situation was this. He had 120 volts on both sides of a switch (turned on) feeding a light fixture, but the light wasn’t working. He had taken off the wire nut for the neutral wires as part of his testing, and that’s when, to his surprise, he got a shock from the neutral! How can this be? A neutral is the grounded conductor? So he tested with his meter, and sure enough, 120 volts to ground!  That’s when I knew he was dealing with an open or loaded neutral.

When someone contacts me with an electrical problem, one of the first questions I like to ask is “What were you doing/working on when this problem started”. With Rob, I found out that he was adding some devices to this circuit, and in another junction box he had taken apart the splices.

I asked if the neutral (white) wires were disconnected, and I got the answer I was looking for to solve this mystery. Yes, the wires were apart! Without a continuous path back to the panel, and the neutral buss bar, the voltage has no place to go to complete the circuit.  The hot (black wires) were still connected and the breaker was back on, but without the neutral path the light won’t work, and the neutral ahead of that open splice will have power on it, the same as the hot wire. With the switch on, the power travels through the load (in this case, a light bulb filament), and back on the neutral, but no connection to the grounded buss bar, and that is how you get a shock from a neutral!

Here’s a diagram to help you understand the situation, and why it happens. 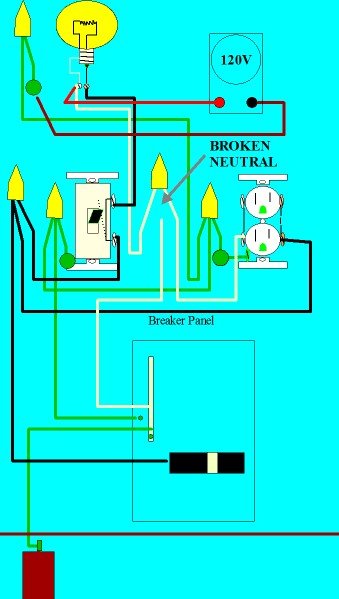 This is a line diagram to simplify this further. In a normal situation with the neutral path intact, you would have 120 volts measured from across the light bulb or the receptacle.  In this case, both sides of the light (hot and neutral) are the same, thus no potential difference (voltage), and the bulb does not light up. But you do if you are grounded and then touch the white wire! 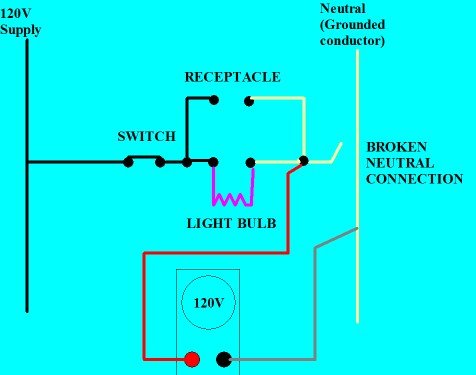 Another mystery solved, and a lesson learned! If you are working on an electrical circuit, make certain the power is off! Check, and double-check that all the components of the circuit are back in place, devices and plates installed, splices made, and junction box cover back on!

If you want to understand more about your home’s electrical system, the best tool you can add to your toolkit is “The Basics of Household Wiring” DVD or e-book.  This is 83 minutes of the best home electrical educational tool available anywhere, and can be purchased through our website.  This exceptional instructional aid covers most home wiring projects and would be a tremendous addition to anyone’s toolbox.  This DVD will help you do it right, do it safely AND save money.

Have questions about this or any other electrical project?  Ask below, or you can comment on the video at my YouTube channel or on my Facebook Page.