Low pressure sodium (LPS) lights are similar in operation to fluorescent lights, except that there is neon and sodium instead of argon and mercury, and there are no phosphors. 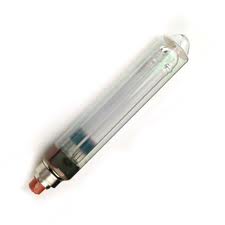 The sodium vapor emits a yellow color without the help of
phosphors.

They are highly efficient, and have seen use in parking lots and in overhead roadway lights.

The color output is almost a pure yellow, thus all colors viewed under LPS seem only to be shades of gray.  You can’t discern a blue car from a red car since they both appear dark brown.  If you park your car under LPS lights in a large parking lot, it may be difficult to recognize your car when you look for it.

LPS lighting is not widely used.