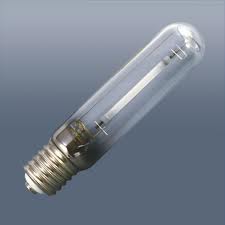 High pressure sodium lighting, most often used in commercial and outdoor applications, is recognized for the yellow light it provides.

High pressure sodium lights are similar in operation to mercury vapor lights, except there is sodium together with the mercury.

Sodium at high temperatures attacks glass, so the bulb envelope is made instead from a whitish translucent ceramic.

Sodium at high pressures behaves differently than mercury, and produces a more even color.  It is still strongly yellow, but renders other colors well.  It has an efficiency of about 100 LPW.